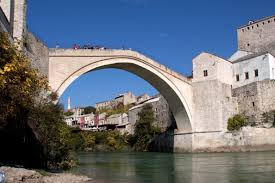 Even though there was an agreement in place, made during WWII to not destroy property of cultural heritage, the 400 year old single arch Mostar Bridge, located in Bosnia-Herzegovina, was blown up in 1993 during the Bosnian conflict. The city of Mostar, once a peaceful symbol of intermingled communities of different faiths, was ripped in two during the conflict. In addition to innocent lives lost, the centuries old culture and its artifacts were also mourned as collateral damage.

Collateral Damage: What can the Mostar Bridge (1566-1993) teach us about business partnerships?

Strategy and culture are important elements to align in any partnership, acquisition or merger.

Consider a partnership in which you have spent countless hours and months bringing on board; socializing the objectives and effort with the respective implementation teams that come to value each other as collegiate partners, and the customers who eventually get to benefit from the combined solution created by the partnership. Then one day, an acquisition is announced and the copacetic partner relationship you and the team had worked so hard on developing and which was showing positive results becomes suddenly irrelevant to the larger business strategy. Your superior tells you to reduce or stop your time spent on the deployment of the joint effort because it’s no longer a priority. Without a strong focus on management, maintenance and delivery of the partnered solution, employees and customers start to feel sidelined or worse—forgotten.

Is this collateral damage necessary?

Perhaps not. Had the acquiring company or partners taken more time to understand and value each other’s strategies and culture, they might have taken a different approach. One famous example is that of Quaker Oats which acquired the newcomer of the time, Snapple in 1994. So excited to get Snapple in all the major grocery chains, Quaker deployed a costly marketing campaign which was an epic failure. Snapple was not a hit in the big grocery market and it suffered collateral damage in its niche market of small, private, mom and pop stores that had made it so popular in the first place. Quaker underestimated the strength of Snapple’s strategy and culture.

FYI: In the case of a hostile takeover, strategy and culture go out the window, and there can be devastating and costly collateral damage in the form of employee layoffs and severed customer and partner contracts. I’m not keen on experiencing this destructive strategy and hope you haven’t had to experience it either.

Share a partnership lost or destroyed due to acquisition or merger.